History of American Football in Japan 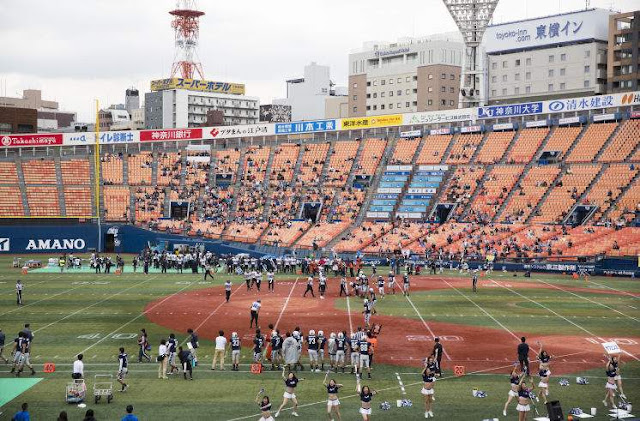 Organized American football was introduced into Japan in 1934 by Paul Rusch, an American missionary who was teaching at Rikkyo University in Tokyo and formed a team at the school. The first-ever game was played in November that year at Tokyo’s Jingu Stadium, drawing a crowd of 15,000 despite being held on a weekday.

Rusch left the country during World War II, when football and other American sports were abandoned, but returned in the 1950s and helped spread the game. Rusch is referred to as the “Father of American Football in Japan” and for his efforts, the MVP trophy of the national championship Rice Bowl is named in his honor.

The national collegiate championship, called the Koshien Bowl, was started in 1947, pitting the top teams in the Kanto (east) and Kansai (west) regions. It’s name comes from Koshien Stadium, one of Japan’s most tradition-rich baseball stadiums located between Osaka and Kobe.

Club teams began forming in the late 1950s and the first company-sponsored team, Mitsubishi Jushi, was founded in 1961. More companies became involved and in 1971, the Japan Shakaijin American Football League was formed. (“Shakaijin” refers to a member of society who is no longer in school.)

In 1985, the shakaijin league’s current tiered format was launched with the formation of the Japan Shakaijin American Football Association, which is now the Japan American Football Association, the present national governing body of the sport. Seven teams made up the first division, of which only the Panasonic Impulse (then called Matsushita Denko) currently remains.

In 1996, the league was reorganized as the X-League with the top tier revamped into 18 teams split into three divisions–two in the Kanto region and one in the Kansai region. In 1988, the championship game was called the Tokyo Super Bowl and moved to Tokyo Dome. Since 2003, it has been called the Japan X Bowl and, in principle, is played at Tokyo Dome.

The first high school championship was played in 1970, and later became officially known as the Christmas Bowl.

Starting with the 1983 season, Japan inaugurated a national championship, with the shakaijin league and collegiate champions pitted against each other in the Rice Bowl. Up to then, the Rice Bowl, which started in 1948 through Rusch’s efforts, had been a clash between college all-stars teams from the Kanto and Kansai regions.

The Rice Bowl is played on January 4 and draws up to 30,000. While the college teams dominated in the early years, the improvement of the X-League over the years has switched the balance of power, and the X-League teams have won 11 of the last 12 games, including the last seven.

There are currently 421 teams throughout the nation registered with the Japan American Football Association. The largest segment is college teams with 210, while 115 high schools play the sport. There are 23 middle high school teams and 21 in elementary schools. The X-League has 52 teams. A number of women’s teams play flag football, although there are two tackle-football teams.

The NFL has a strong following in Japan, where exhibition games as part of the NFL American Bowl series were played almost annually from 1989 to 2005. There was also an annual college football game, called the Mirage Bowl then the Coca-Cola Bowl, which pitted top teams from 1977 to 1993. Barry Sanders rushed for over 300 yards for Oklahoma State in 1988, and the 716 yards that Houston’s David Klinger threw for in a 62-45 win over Arizona State at Tokyo Dome in 1990 stood as an NCAA record until last year.

Outside of the United States, Japan has established itself as a world powerhouse in American football, on par with Canada and well exceeding Europe, with superior techniques and coaching making up for smaller average size. Of the five IFAF World Championships (originally called the World Cup) held so far, Japan has never finished lower than third place.

Japan won the first two World Championships, although the United States did not participate in either. In the inaugural tournament, in 1999 in Palermo, Italy, Japan defeated Mexico 6-0 in overtime in the final. Four years later in Stuttgart, Germany, Japan and Mexico again met in the final, with Japan winning 34-14.

Japan hosted the 2007 World Championship in Kawasaki. The USA sent a team for the first time, and dethroned Japan with a 23-20 overtime victory in the final. In 2011 in Austria, Japan failed to make the final for the first time, losing a close game to Canada in the semifinals, but defeated Mexico 17-14 in the third-place game.

At the 2015 World Championship in Canton, Ohio, Japan finished as runner-up to the United States.

The Japan national team has also played in a number of international exhibition games. Among those, Japan defeated a team of All-Stars from the U.S. state of Hawaii 20-16 in a game called the Japan-USA Bowl in 2005. In 2009, Japan lost 19-3 to the “Fighting Irish Legends,” a team of former players from U.S. college powerhouse Notre Dame. The following year, the national team traveled to Germany for the German-Japan Bowl in 2010, where the Japanese won 24-14.

In January 1989, a Japan collegiate all-star team lost heavily to William & Mary College in the Epson Ivy Bowl. The following December, the game was changed so that the Japanese team would face an all-star team from the Ivy League. Seven games were played, all won by the Ivy Leaguers, but with much closer scores than the inaugural game.

The X-League consists of two types of teams–company and club–and all of the players are amateurs. Noone is paid to play. The company team is directly “owned” by a company and, for the most part, the players are employees of that firm. The club teams are supported by a sponsor or sponsors, with the players not limited to being employees of those companies. In most cases, one major corporation is the main sponsor and the team takes that company’s name.

The Obic Seagulls, who won an unprecedented four straight league titles from 2010 to 2013, is an example of a club team, although it was originally a company team owned by Recruit. The past three decades have seen incredible turnover in the makeup of the league, reflecting the economic situation of the country. The Fujitsu Frontiers, who won their first-ever X-League title in 2014, are one of the few remaining company teams.

The late 1980s saw a large number of Japanese banks field teams. But in the wake of the bursting of the stock market and real estate bubbles, the banks gradually disbanded their teams and by 2001, none were left in the first division. Two former powerhouses sponsored by apparel firms, Renown and Onward, no longer have teams, casualties of the economic downturn in that industry.

The regular season begins in September and runs through November. The playoffs are held in December, culminating in the Japan X Bowl for the league championship in late December.

As for format, the league is divided into four tiers, similar to the divisions in soccer leagues around the world. Top teams in the lower divisions can move up by winning playoffs against the bottom teams in the division above it.

The top two tiers are both divided into three divisions–East, Central and West–with six teams in each. The East and Central divisions consist of teams in the Kanto region (east Japan that includes Tokyo), while the West consists of teams from the Kansai region (west Japan, mainly Osaka).

In 2001, the X-League changed its rule banning foreign players, but limited them to two on each side of the ball. Also, those who have previously played professionally in the NFL are still barred. As with the Japanese players, the foreigners are not paid to play, but are provided with jobs, either in the company that owns or sponsors the team or an affiliated firm. They have come from various college levels, including top division schools such as UCLA, Colorado, Arizona and Hawaii. Several have come from the Ivy League.

The first full-time player was defensive lineman George Heather, out of San Diego State, who played for the now-defunct Onward Skylarks. The first quarterback, Robert Sloan, played the next year for the Renown Rovers, another team that no longer exists. In 2004, Arizona wide receiver Brad Brennan of Fujitsu became the first American to make the All X-League team.

No foreigner has stood out more than Obic Seagulls defensive end Kevin Jackson, who was an All X-League team selection in his first 10 seasons in the league starting from 2005. He has also won the league MVP award.

The IBM BigBlue took recruiting to a new level when they brought in quarterback Kevin Craft of UCLA in 2012. One of two QBs to join the league that year (the first since 2002), he smashed all of the league’s passing records and led IBM to the 2014 championship game for the first time in its history. Fujitsu, meanwhile, countered by landing Colby Cameron, a record-setting QB at Louisiana Tech, who led the Frontiers to the Japan X Bowl, where they beat IBM for their first-ever title. Fujitsu running back Gino Gordon, out of Harvard, was named MVP.